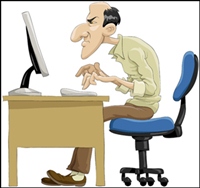 With an assignment due the next day, my son would ponder the opening sentence for a long time. Sometimes, two hours would pass before I'd check on his progress only to find him sitting in front of a blank screen.

When he said he didn't know what to write, I would say, “Just start writing.” He would look at me with a glazed look, like I had lost my mind. He didn't agree with my write now—fix it later philosophy.

If I asked my son to tell me about his subject, especially if it was about history, he could talk for an hour. He's a history buff, and he can go on and on about the Civil War. But that first sentence stumped him when it came to writing out his ideas.

I've had young people ask me what to do about writer's block, and my answer is always Just start writing!

For me, sometimes I feel a special inspiration for a project and the writing comes easily. But if I don't feel that unction, I write anyway. It's kind of like cooking. Sometimes nothing sounds good. I open the fridge, see the package of chicken, drag out a recipe, and cook. It's yummy and everybody eats, but it wasn't particularly fun to make.

Think about the college research paper we all struggled to word oh so perfectly. It was due on a certain day, a specific time, and we had to do everything in our power to make sure it was ready. Were we inspired? Probably not. But we wrote it anyway.

I picture my writing at its very best when I have a heart for the story. But if I sit around waiting for that special spark to strike, I won't write very much.

A few years ago, following a tragedy in our family, I thought that perhaps I would not be able to write again for a long while. For several years previous to this, I had been writing and directing two-act plays. Spring was coming and with actors and parents expecting a production, I had zero ideas. One day someone asked if I was going to do a play. Well...I hedged, then I told her about my lack of inspiration. My thoughts were leaning toward definitely not doing a play—unless God gave me an idea.

Not long after saying those words, a story tumbled through me so fast I was amazed. In two weekends, I wrote the entire play of The Island of Shalamar, a medieval allegory about a king and his son and how evil was sneaking into the land. I didn't have a lot of time for revisions, but the play turned out to be a blessing, a tender story that I looked back on for quite a few years as my best writing ever.

However, since The Island of Shalamar, I have written plays that I would consider much better writing. I spent more time editing and improving word choices. I created stronger characters with unforgettable traits and flaws. I wrote and rewrote.

Through this journey, I've learned that writing with inspiration and God's anointing is a wondrous experience, but even if I don't feel that driving force, I still need to write.

And who knows? That spark of inspiration might be just around the corner.

How about you? Do you write whether you are inspired or not? What do you do when you don't “feel” like writing?